How do Kayakers use Buoyant force?

Why is it that some objects float and others don’t?  The truth is, it’s because of buoyancy. Here is the second video in our “science of the Olympics” series.

In physics, buoyancy is described as a force exerted by a liquid, gas, or other fluid that opposes an object’s weight. For kayakers, we usually discuss buoyancy relative to a kayak sitting in the water. So to understand buoyant force, we decided to go to the US National Whitewater Facility in Charlotte, NC.

In flat water, a kayaker and his/her boat are being pulled downward via gravity, and a buoyant force is pushing upward.

In the Olympics, slalom kayakers have to go around gates. To change direction quickly, a kayaker can use bouyancy. You see, when they spin around a corner, they whip around the stern of the kayak. The energy of the change in velocity drives the stern of the boat underwater. The force is big which drives it down. It keeps going until the bouyant force slows it down. There is much more water displaced than the kayaker weighs. Since the bouyant force is now much greater than that of gravity, it rockets the kayaker out of the water. Because of the shape of the boat they can direct the force in the direction they want to go instead of just up. Here is a picture of Pablo McCandless mid-turn.

Maybe an easier way to look at this is with a trick kayak. Here Sam Fulbright balances the kayak on its nose. Notice how unequal the forces are at the bottom of his bounce (see picture below). Eventually it gets so great the kayaker can do a flip. How awesome is that!

Here is a fun little problem for you. Just as we highlighted at the end of the video, how would you calculate the force needed to sink the raft given the following… 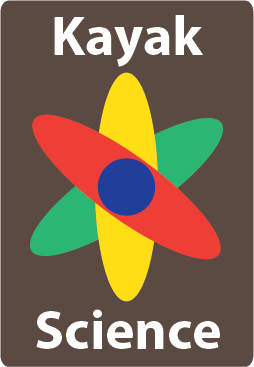